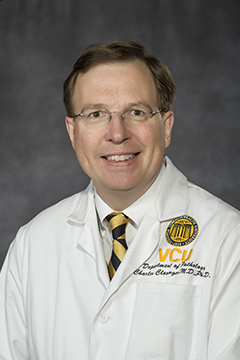 Charles V. Clevenger, MD, PhD was appointed the Chair of the Department of Pathology in 2013, having served previously as the Diana Princess of Wales Professor of Cancer Research and Leader of the Women’s Cancer Research Program of the Robert H. Lurie Comprehensive Cancer Center of Northwestern University.

Dr. Clevenger is an internationally recognized scholar for his research into the role that the neuroendocrine hormone prolactin plays during the pathogenesis of human breast cancer. His lab has made fundamental insights into novel mechanisms of prolactin receptor signal transduction, and has then translated these observations into innovative therapies targeting breast cancer.

As a principal investigator, Dr. Clevenger has been continuously funded by the National Institutes of Health for over 25 years; in addition he has received funding from the Department of Defense Breast Cancer Research Program, and the Susan G. Komen, Avon, and Lynn Sage Foundations. He has served and/or chaired numerous review panels for all of these funding agencies.