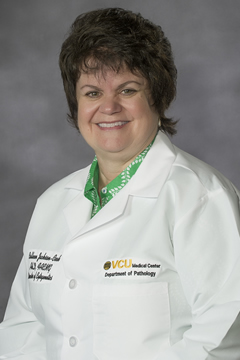 Professor of Pathology; Director of the Cytogenetic Diagnostics Laboratory

Dr. Jackson-Cook received her PhD degree in Human Genetics (with a subspecialty in Cytogenetics) from Virginia Commonwealth University and a master’s degree in Biology from West Virginia University. After completing her Postdoctoral Fellowship in Diagnostic Cytogenetics (under the tutelage of Judith A. Brown, PhD), Dr. Jackson-Cook remained as a faculty member and Associate Director of Cytogenetics at VCU. In 1990 she was recruited to serve as the Director of Cytogenetics at VCU.
Dr. Jackson-Cook is internationally recognized for her work with mosaic Down syndrome and clinical cytogenetics. Additional areas for which she has expertise include acquired chromosomal abnormalities, epigenetics, telomeres, micronuclei, copy number microarrays, and non-mosaic Down syndrome. Her research team has recognized karyotype-phenotype correlations associated with mosaic Down syndrome. Her team has also identified acquired genetic and epigenetic changes associated with aging, stress following childhood adversity, treatments for breast cancer, and fibromyalgia. As a principal investigator, she has received research funding from the National Institutes of Health (NIH) and other sources (Commonwealth Health Research Board, and the Jeffress Memorial Trust). She has numerous publications in peer-reviewed journals and books/chapters. She has also published educational documents, as well as a documentary film about Down syndrome (led by Sasha Waters-Freyer), that are directed at patients and their family members, as well as health and educational professionals. She has been invited to give numerous extramural presentations at local, regional, and international meetings, including (but not limited to) the International Mosaic Down Syndrome Association Conference, the American Cytogenetic Conference, and the American Society of Human Genetics.

Dr. Jackson-Cook is a member of several scientific, honorary and professional societies including the NIH/NICHD-Sponsored Down Syndrome Consortium, the American College of Medical Genetics, the American Society of Human Genetics, and the American Cytogenetics Conference, to name a few. She also serves as the scientific advisor for the International Mosaic Down Syndrome Society. She has served as a grant reviewer for several agencies (including the NIH) and also serves as a manuscript reviewer for numerous journals/societies.

Additionally, Dr. Jackson-Cook enjoys teaching. She is also a Co-Director and lecturer for the Genetic Diagnostic Testing course in the Department of Pathology. She provides lectures for the medical and dental student genetic courses, graduate student courses (Introduction to Human Genetics, Classic Papers in Human Genetics, and Medical Genetics), and clinical lab science students. She has served as the primary/secondary mentor for more than one hundred undergraduate, graduate, postdoctoral and junior faculty trainees. She has received multiple awards in teaching, including the Excellence in Teaching MI Students and the Outstanding Teacher Award for the Department of Human & Molecular Genetics.