Role of the prolactin receptor signaling in breast cancer pathogenesis 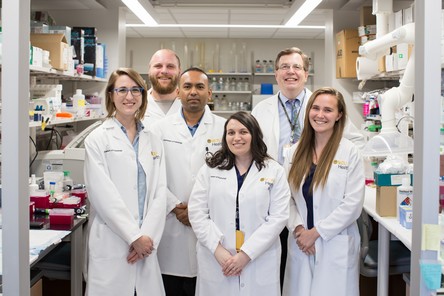 Charles V. Clevenger, MD, PhD is the Chair of the Department of Pathology at VCU. His research is focused on prolactin (PRL) receptor signal transduction and function as it pertains to breast cancer and mammary gland development. Within humans, PRL functions at the endocrine and autocrine/paracrine levels as a growth and differentiation factor within the breast, a hypothesis first suggested by his laboratory. Therefore, one of Dr. Clevenger's major aims is the characterization of those mechanisms that regulate PRL and PRL receptor (PRLr) action in normal and neoplastic tissues. PRL function in human tissues is mediated by seven prolactin receptor isoforms, four of which were initially identified and characterized by his lab. These studies utilize both biochemical approaches to examine PRL-PRLr binding and the interaction of the PRLr with its associated transduction pathways that include JAK2/CypA and the Nek3/Vav2/Rac complexes. In addition to these non-genomic transduction pathways, his lab is also examining the direct actions of both PRL and PRLr within the nucleus as transcriptional co-activators in complex with HDAC6/HMGN2/Stat5. As many of these proteins are targets for novel pharmacotherapies, his lab is actively translating these findings through pre-clinical models into Phase I trials. As such, his findings present several opportunities for the development of novel therapies aimed at modulating PRL action during breast tumorigenesis.