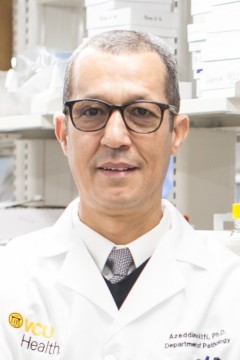 Professor of Pathology; Chair of the Division of Cellular & Molecular Pathogenesis

Azeddine Atfi, PhD, serves as the Chair of the Division of Cellular and Molecular Pathogenesis, Department of Pathology. In 2020, he was appointed as the Leader of the Cancer Biology Program at Massey, a National Cancer Institute designated cancer center. He received his PhD degree in 1992 from the University of Rennes in France. After completing his post-doctoral fellowship at McGill University in Montreal, he was recruited as a permanent faculty member in the National Center for Scientific Research (CNRS, France) in 1998 and promoted in 2002 as Director of the Cell Signaling and Carcinogenesis Program at the French Institute of Health INSERM in Paris. In 2008, he joined Harvard Medical School as a visiting scholar.

Throughout his entire career, Dr. Atfi explores the role of transforming growth factor (TGF-beta) signaling in cancer pathogenesis and progression.  He made key discoveries and breakthroughs and has been the prime mover in the TGF-beta field. His scientific insight and scope are evident in papers that he consistently published in first-rated journals, such as Cancer Cell, Molecular Cell, Developmental Cell, Nature Cell Biology, EMBO, Proceedings of the National Academy of Science USA, and Science Signaling. In addition, he has been invited numerous times to present his research at leading universities and at major national and international conferences. Consistent with the quality of his work, his research program has been continuously funded by the National Institute of Health and other cancer agencies and foundations. For instance, he currently holds three R01 grants from the National Cancer Institute. In the area of service, he has been a recurrent reviewer for a long list of prestigious journals (e.g., Science, Nature Cell Biology, Molecular Cell, etc.) and is currently serving on a number of grant review panels, including the National Cancer Institute. Dr. Atfi was recently appointed as a permanent member on the Tumor Progression and Metastasis study section. The intensity of his participation reflects his strong desire to share his knowledge of science with the ultimate goal to progress our understanding of the general mechanisms underlying the pathogenesis of human cancers.